A few years ago Mark Driscoll got into trouble over plagiarism in his books. One of the books, Trial: 8 Witnesses from 1-2 Peter, had paragraphs taken from New Bible Commentary, edited by Gordon J. Wenham, J. Alec Motyer, Donald A. Carson, and R. T. France . The book was eventually pulled because of the plagiarism.

After the plagiarism was discovered and before the book was taken off the market, Doug Wilson wrote a blog post with his thoughts on the controversy. Wilson said:

All that said, at an objective minimum, there is a gross citation problem in Driscoll’s book Trial, which needs to be acknowledged, owned and corrected. Looking at the two relevant sections, side by side, we know that there is a citation problem. What we don’t know is why or how it got there, about which more in a little bit. But regardless, however it got there, it needs to get out of there. The problem should be owned and corrected, in public, by the author and the publisher. The same goes for anything comparable. (emphasis added)

The production of a book involves numerous people who handle the words prior to publication, unlike a term paper. How could something bad get in? Well, think about research assistants, copy editors, copy editors who think they should have been the author, copy editors who think they should have been the fuehrer, content editors, politically correct content editors, and so on. Just a few weeks ago I had the experience of opening a book I wrote only to have my eyes light upon something that I could never have possibly written, and which some helpful editor (or gnome in the printing press) had inserted for me. It was quite embarrassing, but I didn’t do it, although this leads to the next point. I am nevertheless responsible for it. My name is on the cover.

This is a good argument for only using researchers who are extremely honest, competent, and reliable, and with a system of cross checks in place. But with all said and done, the person whose name is on the cover of the book is responsible to put things completely right if a problem surfaces.  (emphasis added)

But maybe the examples from Driscoll’s book, Trial, were more extensive or different in some way? Well, here are the examples of the plagiarism that I could find.

James, pg 526 (Bruce Etter) This is from the text of the Omnibus essay on James. The material is from the commentary in the NKJV, The Open Bible’s introduction to James, page 1269.

Reflections on the Revolution in France, pg 155 (Douglas Wilson, Natali H. Miller) This example comes from the text of a session following the essay “Reflections on the Revolution in France.” The material was taken from the Internet Modern History Sourcebook. The French text of La Marseillaise is public domain, but the history here and the English translation are copyrighted. The copyright information says, “No permission is granted for commercial use of the Sourcebook. © Paul Halsall Aug 1997.”

Gospel of Mark, pg 366 (Bruce Etter) This example comes from the text of the essay on Mark. The source is from an article, “The Use of εὐθύς (“immediately”) in Mark,” by Professor Rodney J. Decker. It was published in the Journal for Ministry and Theology in 1997.

The City of God, pg 17 (Douglas Wilson, Graham Dennis) This example is from an image caption. The image and the text come from a book, Light at Ground Zero: St. Paul’s Chapel After 9/11, by Krystyna Sanderson. The Omnibus volume gives image credit to Sanderson as the photographer. 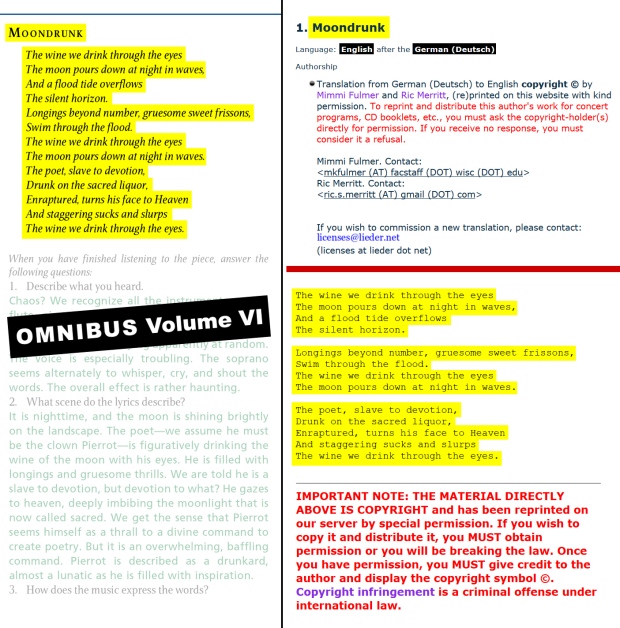 The Sun Also Rises, pg 342 (Nathan Tillman) This is from the text of a session after the essay on The Sun Also Rises. The English translation of the German text is by Mimmi Fulmer and Ric Merritt and is copyrighted. Neither author was cited in the Omnibus text. The copyright says, “To reprint and distribute this author’s work for concert programs, CD booklets, etc., you must ask the copyright-holder(s) directly for permission. If you receive no response, you must consider it a refusal.”

These are merely six examples, one from each volume. Each of these examples is mostly word for word. None of these are from open sources like Wikipedia. The only difference between the Omnibus examples and the Driscoll ones is that there are more of them from the Omnibus. I’m honestly not sure why the “rules” that applied to the Driscoll plagiarism don’t apply to the Omnibus.

I’ll close with a quote from Wilson regarding the plagiarism from A Justice Primer:

8 thoughts on ““Rules for Thee and Not for Me””