When I first was introduced to the ESV, I was very impressed by it. I had grown up using the NASB and hadn’t ever been very fond of the NIV. So, I was pleased by a new “word-for-word” translation option. The translation was smooth and fairly easy to read. It also appeared to be the preferred translation for many books, websites, churches, etc.

When I was researching Eternal Subordination of the Son (ESS), I discovered that the ESV Study Bible’s notes strongly advocate for ESS. This shouldn’t have been too surprising since Dr. Wayne Grudem was the editor for the Study Bible and is one of the leading proponents of ESS. After discovering that Dr. Grudem was on the oversight committee for the ESV translation, I was uncertain, but I knew he was just one man among many on the committee. I hadn’t noticed any real problems in the translation itself.

Last September, however, Crossway announced that they had made new changes to the text and that those changes would be the last ones made. The ESV text would be permanent as of 2016. While it might be a poor decision to determine that you’ll never need to update a translation, I really didn’t have any objection to that part of Crossway’s statement. What was much, much more concerning to me was a couple of the new changes that were now going to be permanently set in stone:

In making these changes, the ESV had decided to change the translation of Genesis 3:16 and 4:7 to reflect a particular interpretation of the passages. I plan to write more soon on the origin and history of this interpretation, but for now I’ll just summarize my concerns using an excerpt from an article by Wendy Alsup and Hannah Anderson:

In the height of the battle against feminism in the 1970s, Susan Fohproposedthat the similarity between 3:16 and 4:7 was that a woman’s desire toward a man was similar to sin’s desire to destroy Cain. It was, dare we say, contrary to him. This connection is problematic for many reasons, including the fact that the language of Genesis 4:7 is unclear and may actually refer to Abel’s good desire toward Cain.**

Worse, from an interpretive standpoint, Foh used the confusing and obscure text of Genesis 4 to project something backonto the clearer Hebrew in Genesis 3. In contrast, a straightforward chronological reading of Genesis 1-4 actually affirms the lexical definition of the preposition ‘el as “for” or “toward.”  In terms of the fall, the woman’s desire for children, her desire for her husband, and the man’s efforts at cultivating the ground are all good things to be pursued in fulfillment of the Creation Mandate; but post-Fall, these good desires are thwarted with painful consequences. Just as the man’s desire to produce fruit from the ground is rewarded with sweat and pain, a woman’s desire to produce children from her own body is rewarded with sweat and pain. Just as the man turns to his attention to the earth looking for fruitful relationship, a woman turns toward (not away from) a man seeking fruitful relationship. (We will explore this more in Part 3.)

The only way translators can justify rendering ‘el as “contrary” is to assume something negative about the woman’s desire based on the use of desire in Genesis 4:7-8. But such a novel change relies solely on commentary, not on accepted definitions to the Hebrew ‘el. (emphasis original)

They go on to explain why this translation has bad implications:

Our first concern about the latest rendering of Genesis 3:16 is that it does not fit the larger rhetorical frame of the passage. It implies a sinful motivation for the woman’s desire rather than describing the broken context in which she finds herself. It also disrupts the parallelism of the text. God speaks to the woman about how the Fall affects her. He then speaks to the man about how the Fall affects him. Rendering 3:16 as “your desire shall be contrary to your husband” injects a statement about the woman’s nature when there is no corresponding statement about the man’s nature in terms of his work. We believe there is no parallel statement because Genesis 3:16 should not be read as an indictment of the woman’s desire.

As we discussed in Part 2, you can only arrive at a negative reading of the woman’s desire if you read negativity back into the passage from Genesis 4:7-8. But such a reading is highly prejudicial because it implies that the woman’s desires by their very existence are contrary to her husband. Because the rest of the passage is read as a statement of fact about this post-Fall world, the sentence “your desires shall be contrary to your husband” will also be read as a statement of fact. The rhetorical affect is to create suspicion around every desire that a woman has.

After a flurry of articles and blog posts, Crossway announced that the 2016 ESV text would not be permanent. While many were relieved to read this, some of us noted that nothing was said about the controversial change to Genesis 3:16 and 4:7. Would that be changed? To date, nothing has been said regarding changing these passages back. I know that published text takes time to be changed. As such, I expected that the ESV Bibles published last year would reflect the “contrary to” translation. And they do. This includes the big six-volume ESV Reader’s Bible.

I had hoped that maybe the online versions could be and would be changed. But so far, they haven’t. The current edition of the ESV on the ESV.org website gives this translation for Genesis 3:16:

To the woman he said, “I will surely multiply your pain in childbearing; in pain you shall bring forth children. Your desire shall be contrary to your husband, but he shall rule over you.” (Genesis 3:16 ESV)

The same is true for the major online Bible websites that offer multiple translations. The 2016 edition of the ESV with “contrary to” is the one in use.

I found this very discouraging. But it wasn’t the only reason I had for changing translations. In the Trinity debate this summer and the aftermath this fall, one of the discussions was over the interpretation of “monogenes.” Is it “only begotten” as the older English translations have it? Should it be “only,” “one and only,” “unique” as most of the recent translations, including the ESV, have it?

Between the “contrary to” in Genesis 3 and 4 and the missing “only begotten” in the New Testament passages, my husband and I decided that the ESV wasn’t the translation we wanted to use as a family. To be clear, we’re not dogmatic about it. Our church and many of our friends still use the ESV, we aren’t complaining about it or demanding change. But for our own devotions individually and as a family, we’ve decided to switch to the New American Standard (NASB). We have four main reasons for doing so.

For God so loved the world, that He gave His only begotten Son, that whoever believes in Him shall not perish, but have eternal life. (John 3:16 NASB)

2. The NASB does not translate Genesis 3:16 and 4:7 to say “contrary to.” In fact, I really like the way the NASB translates the passage. Especially the “yet”:

To the woman He said, “I will greatly multiply Your pain in childbirth, In pain you will bring forth children; Yet your desire will be for your husband, And he will rule over you.” (Genesis 3:16 NASB)

3. As you can see in the NASB and ESV verses quoted here, the NASB capitalizes the divine pronouns whereas the ESV does not. While it isn’t necessary, it is something I prefer. I find it helps keep track in a passage on who is talking.

4. In all translations, it’s necessary to add words at times. This is true in any translation from one language to another. What I appreciate about the NASB is that it tells you when words have been added by italicizing them. This allows the reader to consider how the translators have added things for clarity. It also is very transparent. The reader knows what words aren’t actually there in the original language.

and be subject to one another in the fear of Christ. Wives, be subject to your own husbands, as to the Lord. (Ephesians 5:21-22 NASB)

I thought it was interesting to note that in verse 22, “be subject” has been added so that the sentence makes sense. Considering that there is much discussion about what connection there should be between verses 21 and 22, I think it worth noting that verse 22 follows on referring to verse 21 in the original Greek. The literal translation is: “Wives, to your own husbands, as to the Lord.” Without verse 21, verse 22 just wouldn’t make sense. Knowing which words have been added can enhance Bible study.

So for these various reasons my husband and I have switched from the ESV to the NASB. I know that the NASB, or any other translation, is not without problems. But for now, we are content with our decision. Now, to find someone to put a new binding on my old NASB. More than twenty years of backpacks, college retreats, and Bible study has left it being held together with tape. Maybe for my birthday … 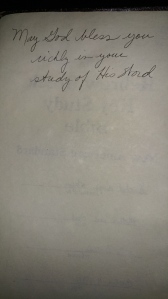 35 thoughts on “Saying Farewell to the ESV”